In Memory of our Son Sgt. John E. Allen 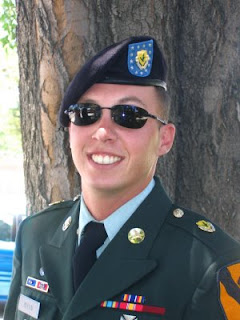 Our son was a wonderful soul and so talented.
He cared about people in a way that my husband and I, sometimes, couldn't understand.  He brought kids to us that needed assistance with their parents/guardians or who just needed a place to call home for a while.  We helped out in the lives of so many of the kids that John brought to us.  For one of them, Brandy, we became official foster parents just to keep her safe and in our home.
John was a born 'medic' whether it was for the physical body or the soul.  He just knew what people needed.
He brought animals to our home, too.  The last, was a wonderful Rottweiler, Max.  Just a puppy, but John shared his twin bed with this 'puppy' until he was over 130lbs!  We had to find him a new home, though, because we didn't have the time to give to this family member of ours....Rotts need lots of time, that is for sure....after John joined the Army.  We found him a wonderful new family and they still tell us that Max thinks he a 'lap dog' at 150lbs!
Our son learned to play the violin at 9yrs old with his twin sister.  I taught them both how to read notes and play, along with their music teacher who I helped with the class.  But the violin wasn't his passion....it was the piano.  He taught himself.  He and his friend, Victor, would come home from high school and play on the two portable keyboards that we had at the time.  The didn't play rock or country but made up the most beautiful 'classical' compositions together.  I wish I had a recording of the one song that they completed but I only have half of it that they recorded.  It wasn't the melody but just the background part of the composition.  I used to just put my book down and listen to them play, over and over again.  It was so beautiful that I could listen to it forever!
John was a very talented artist.  He drew wonderful portraits of people.  His last portrait was of his beautiful wife, Aspen.  He was drawing it for her while he was in Iraq but somehow it never made it home!  I have heard from other people that he worked with, in Iraq, that it was very good but it somehow disappeared after he died.  I know who has it but haven't been able to make the Army make her send it to his wife, to which it belongs.  People who steal come from all walks of life, even in the Army!
John did sculpture work, too.  As you can see, from the picture, he made this beautiful hummingbird.  He made it from only a piece of wire, masking tape, and paint.  He made it for his grandmother on her 67th birthday.....she still treasures it.
John was a gymnast.  Wow, could he do things with his body that most could only dream of doing!  He did backflips and other things.  He could run at a wall, hit it, and do a backflip off the wall.  He once tried it without the wall, or a spotter, and I got a call from the school telling me to take him to the doctor....he broke his collarbone.
After high school, which he barely made the grade to graduate but he did, he went into the Navy.  That was July 1999.  He became a fuelman/firefighter off of the USS Carl Vinson.  He was in the Persian Gulf when 9/11 happened and most munitions came from his ship.  He is a veteran of Operation Enduring Freedom, too, which isn't reflected in his service records, for some reason.
When he left the Navy, John wanted to become a police officer.  Everything he had done.....filled out apps, tests, background checks, etc....became lost somewhere in the mists of time.  After 2 years, he said he was tired of all of the 'outside world and their expectations' and said he was going into the Army.  He wanted to join the Airborne Division but he 'settled' for training as a medic.  A really good choice for him!  He was in the Medical Magnet in high school until his friends took over.....if you know what I mean.
John was a pain in the butt as a teenager but grew into a wonderful man right before my eyes as I watched him marry his wife on July 7, 2006.  He became responsible and a loving husband and paid his bills, which he was kind of remiss before, and just was a joy to be around before he left for deployment in Iraq.
I watched my son grow from a loving little boy, to a irresponsible teenager, to a caring young man, to a Navy personnell, to a frustrated young adult and finally to a man he was proud of being!
When he died, I know he was proud of who he was and, as a mother, I was so proud of what he was, MY SON!
I will love and miss him forever!
Kellie
Posted by Rob on 11/07/2008
Email ThisBlogThis!Share to TwitterShare to FacebookShare to Pinterest

Kellie,
My heart goes out to you. I know John and my son are up there being goofy:)
You have so much to be proud of in John. When I read this, I felt I heard his voice speak through you.
Hugs to you!
Candie, Sgt Jason's Mom

Mom, this is absolutely beautiful. This is a hearfelt summary of the phases of his life. I couldn't have done better. It brought back some memories. We all love you, Amanda