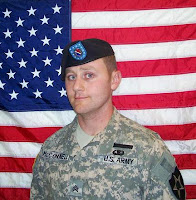 I first met Andrew McConnell at North Georgia College and State University; a Military college in Dahlonega Georgia. We were both assigned to 2nd Bat. First platoon in Foxtrot Company. It was a frantic, hard core, "Hooah" kind of  atmosphere - a true Army environment. When walking by any officer, it was required that all new recruits salute, say "good morning/afternoon/evening X" and sound off with your company motto. I can remember many times being worn down, exausted, on the brink of collapse, and hearing McConnell sound off - "GOOD AFTERNOON SIR, KEEP UP THE FIRE!" It was always a morale booster, it seemed to galvanize my spirit and that of everyone in earshot of his shout. He was always like that. After the initial APFT, I realized that I was having a difficult time getting my run time where it should be. McConnell also noticed, and took it upon himself to help me. He would take his free time and go running or swimming with me one on one. He helped me learn to breathe better while running long distances. He made me a stronger individual, thus making our whole platoon stronger. Andrew McConnell understood what it meant to be a soldier, a friend, a brother in arms. It pains me to say that he met an untimely end fighting for those he loved. I know that Andrew is sorely missed... I know there is not a day that goes by where he is not on someone's mind.  I know without a doubt that his attitude towards life, his love for his family, country, and fellow soldiers will endure in the lives of those of us that were lucky enough to know him, Lucky enough to call him a friend.
Posted by Rob on 6/24/2013
Email ThisBlogThis!Share to TwitterShare to FacebookShare to Pinterest