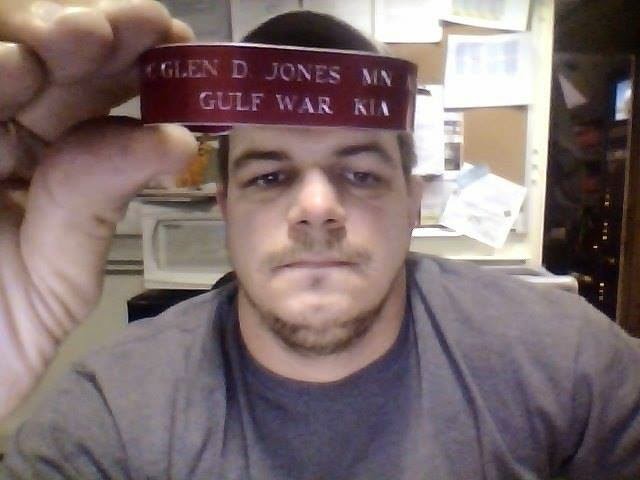 I got my bracelet in honor of my childhood friend SPC Glen D Jones. I spent part of my childhood growing up in northern Minnesota. Glen used to live behind us.
He was a few years older than I was but he was so cool to hang out with. We would go sledding in the winter time on the big hill by his house and ride all over the place on our bikes in the summer time. There were a few times that I was running late to meet my curfew that he would throw my bike in the back of his truck to make sure I made it home on time. Next to his house was a cemetery and every Memorial Day I would go and watch and be there when the services would take place. My family moved away so my Dad could go to Seminary. Once he was done we moved to North Dakota and were there when the first Gulf War started. We watched the news coverage like everyone else.
We watched the aftermath of the SCUD hitting the barracks in Saudi and saw the aftermath. A week or so later on a Saturday night my Grandmother that lived in MN called my dad and let her know to watch the newspaper we got and on the front page was the funeral of my childhood friend. I knew he joined the Army Guard in MN after graduating. That was my first real taste of what War was all about, the first person I actually knew that had died because of War. I was tore up for a few days and had some long talks with my parents.
Well when I graduated high school, I myself joined the Air Force. I have been deployed and almost went to Saudi myself. After seeing an advertisement I decided to go to the Memorial Bracelets website and see if I could find a bracelet. Well, after thinking long and hard I decided that it was fitting to remember my childhood friend in this way. In closing I would like to say that Glen you are missed by many and now I have a lasting reminder of our friendship and our childhood.
Posted by Rob on 8/16/2014
Email ThisBlogThis!Share to TwitterShare to FacebookShare to Pinterest