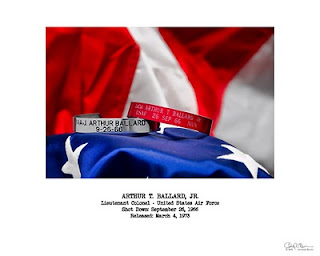 This is perhaps the most important photograph I have ever made. When my father was serving in the Vietnam War in 1967, my mother obtained a POW bracelet which bore the name of Arthur Ballard. Earlier this year, mom and I found the bracelet in a box.

Thanks to Google, I was able to find the now-retired Colonel Ballard and let him know we had the bracelet and wished to return it to him. While Googling his name, I found your Memorial Bracelets website and it had a listing for Colonel Ballard. I got the POW returnee bracelet and then had the idea for this photo.

Now, some 43 years later, Colonel Ballard has had his bracelet returned to him (one of many returned to him throughout the years), and my mom has his returnee bracelet in its place. It's been an emotional experience for all of us. Corresponding with Col. Ballard has been an honor; he's an American hero and a very dear man. He was held captive for over six years of his life in North Vietnam.

Posted by Rob on 12/22/2010
Email ThisBlogThis!Share to TwitterShare to FacebookShare to Pinterest

I've been wearing your bracelet for many years and I'm so glad you were released. I've always wondered how you made out I'm sure it wasn't But I'm glad that you endured you ordeal.
I know this may seem trite but being a female I have utmost respect for the brave young men that keep our freedoms alive. I get
choked up saying this in person so I'm happy to have the opportunity
to give you my sincere thanks for your sacrifices.