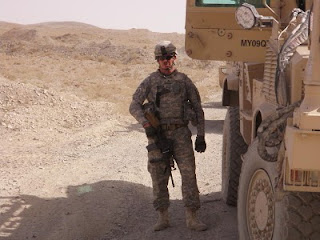 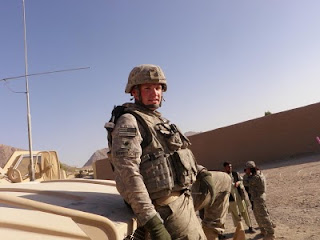 My name is Jonathan Lugo, The reason I purchased these Memorial Bracelets is to honor and remember the lost of 3 great soldiers whom I had the honor to serve with, two of them during OEF 09-11 and one during OIF 07-09.
SGT Simpson was a great guy who would touch anyone with his can do attitude. He was a great soldier anyone could come to whenever one needed an advice or tips to get the mission acomplished. I met SGT Simpson back in 08 upon my arrival to the 20th Engineers Battalion. I used to be the S6 NCOIC and he used to work on S3. While deployed here in Afghanistan SGT Simpson served with the 20th Engineer Battalion under HHC and then was moved to the 584th MAC. He got sent home for some illness and he fough with everything he could and re-united with us out here on Fob Frontenac, Kandahar City. I still remember that very day he came back he mentioned to my room mate "I'm finally home". Before his last mission I had the oportunity to sit with him on the dinning facility to eat dinner and I remember we were making jokes and laughing. The day of his mission, he called me to fill his radios since I'm a communications specialist and he told me "Lugo, I want you to fill my radios, I trust you and I know you will ensure I'm taken care of". The night of the attack I was working on the Tactial Operations Center when we received a message notifying us of the attack. I automatically got flashbacks from Iraq and I couldnt believe it. I ran up and down across the FOB to coordinate a recovery accets that can go out there and recover the striked vehicle. When I returned to the toc, I was informed that we had a soldier KIA. When I looked up to the board and saw his name, I couldn't hold my tears.
SPC Morrison was a soldier who by just talking to you, your day will go smoother. He was a soldier that no matter what was the mission at hand, he never said no. I remember days when I used to work on his vehicle's radio he will sit outside the back door and just talk to me and ask me questions about Iraq and always telling me "Lugo, when are you coming out with us to missions". SPC Morrison was a great soldier and me being a former NCO, I knew he would had become one of the best NCO's I've met.
My other bracelet was in honor to PFC Hall. I met PFC Hall not too long after finishing with my advance individual training and getting attached to a unit I didn't knew to support them in their deployment to Iraq. Upon my arrival to the 479th Engineers, PFC Hall greeted me and started joking with me for "being a puertorican on a battalion full of gringos". While at Ft. Mc Coy Winsconsin, PFC Hall and I became close friends. He had the ability to make me laugh and make me forget about my fears of my first deployment and allowed me to cope with being a total stranger in a new unit. While in Baghdad, PFC Hall's ability to make everyone laugh and make random jokes even to superiors, allowed me to made it back home alive. There was times when I though that was the end for me but here he came with one of his jokes like "SGT Lugo, why the long face... ohh no SGT you gonna have to do some push ups for me if you going to be so serious" among others. Thanks to him I can say I'm where I am today. To my fallen soldiers from the Nov 5th shooting at Ft Hood, SPC Morrison, SGT Simpson and PFC Hall, you guys will always be in my mind and in my heart. I'm proud of being able to serve with you guys and I will never foget you guys. Thanks for the times we had together.
Posted by Rob on 11/11/2010
Email ThisBlogThis!Share to TwitterShare to FacebookShare to Pinterest