To keep their families in my prayers...

I have worn a Memorial Bracelet in memory of two Royal Australian Air Force pilots who were lost in November 1970. My old bracelet finally wore out and I recently ordered a replacement. While I was waiting for the new one to arrive I learned from the Operation Aussies Home web site that their remains had finally been recovered and identified and that they were finally home after more than 39 years. Flying Officer Herbert and Pilot Officer Carver were the last two Australian servicemen unaccounted for from the Vietnam War and they have now been given the heroes welcome and burial that they so richly deserved.
Thank you for your service gentlemen, you were never forgotten.

Posted by Rob on 9/14/2009 No comments:
Email ThisBlogThis!Share to TwitterShare to FacebookShare to Pinterest

To Replace My Old POW Bracelet 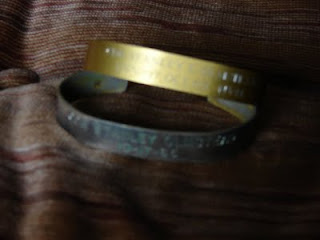 Posted by Rob on 9/02/2009 No comments:
Email ThisBlogThis!Share to TwitterShare to FacebookShare to Pinterest

Even though it's been more than 50 years, I still remember Buzz Ellison. I served with Buzz when he was attached to VA42 just prior to his deployment to VA85. I was an AT and Buzz was one of the few officers that took a real interest in helping enlisted men. One day he arrainged for a few of us to take a short course in TV repair. Over the years that skill has helped be on many occasions. What a great thing for him to do. We'll probably never find out his fate but, that doesn't mean that we should ever forget.

Posted by Rob on 9/02/2009 No comments:
Email ThisBlogThis!Share to TwitterShare to FacebookShare to Pinterest
Newer Posts Older Posts Home
Subscribe to: Posts (Atom)