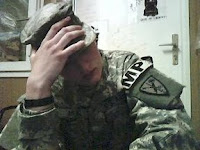 My sister got me a Memorial Bracelet when I found out that a friend of mine passed away. It was hard for me to understand how someone could be gone that I just went thew
Basic and A.I.T with. Seems like it was just the other day I was playing in the snow with him. It was a big wake up call for me! I'm deployed as I type this e-mail. Now that I have have Bohannon's Memorial bracelet around my wrist, he is not forgotten in anyway. He will always be my brother in arms

Pfc. Muir
Posted by Rob on 9/28/2007 No comments:
Email ThisBlogThis!Share to TwitterShare to FacebookShare to Pinterest

I am stationed in Okinawa, Japan.

This is a great reminder of my friend and fellow communicator GySgt Shawn Lane. He and I were promoted to GySgt (E7) together and ate lunch often while we were stationed at HQBN Comm Co, 1st MARDIV.

I saw him last at lunch the day before I went overseas. His wife and son were his life and we talked about our families ad nauseum (to others I am sure). When I learned of his death I was devastated, and even more so because I was stationed in Japan but in Korea on an exercise and could not fly to Camp Pendleton and pay my respects. To this day I miss him. I wish blessings to his family and to all who remember him.


Danielle
Posted by Rob on 9/06/2007 No comments:
Email ThisBlogThis!Share to TwitterShare to FacebookShare to Pinterest

To Never Forget Those Left Behind ing Vietnam

Well, I am a 58yo USMC 68-72/jarhead prc-25 humping grunt who served in Vietnam I Corps 69-70. I was one of six Congressman sons to have served in country RVN. Both my step-father and mother were U.S. Senators. I have been wearing several different POW/MIA bracelets and also one Montenegro's (Bru) bracelet dug out of the attic since 11/82 when involved with VVA 134 out of Dayton Beach, Fl., and went to the original Wall Dedication/5th & 10th yrs as well.

The VVA comradeships and I think subsequent involvement with the National League of Families in the 80's and early 90's probably kept me from going over the edge to personal self-destruction. This bracelet replaces my last broken one. I never knew Major. Henry Allen-USAF, but I was in/out of northern I Corps and Laos (where he was shot down) on Uncle Ho's trail when he became MIA. I was blessed to meet his surviving brother several times who lives/or lived in the greater Dayton area and he was kind enough way back when to speak publicly on September-National POW-MIA Day functions.

There is no description of the pain that would suffice to describe what he and many of the brave surviving family members felt and still feel. So many with no welcome home. No one has the corner on the market for pain! So I wear this bracelet to Never Forget Those Left Behind nor the values of humility and long suffering of those American MIA Familes.
Posted by Rob on 9/05/2007 No comments:
Email ThisBlogThis!Share to TwitterShare to FacebookShare to Pinterest

To Replace my Original POW/MIA Bracelet

My original POW/MIA bracelet was purchased in or around 1972 when I was in high school and was also for Captain Dean P. St Pierre. Like many folks I actively protested the Vietnam War, but I also fiercely supported our military men and women and continue to do so today. The ill treatment of returning soldiers from Southeast Asia by so many is unforgivable in my eyes. My Father served in Korea and Vietnam and I am proud to be the daughter of a veteran. I have not continuously wore my bracelet, but around the first Gulf War, I ran across it and thought it was time to wear it again as a reminder of the sacrifice that is made for our freedom and to keep our military force close to my heart, thoughts and prayers. Over the years, the black lettering has worn off and I was worried that eventually I would no longer be able to read Captain St Pierre's name. In my quest to never forget him, I have occasionally did a little research on the Internet on his name and ran across a link for this company. I never imagined I would be able to duplicate a bracelet with his name, so I was very moved to be able to symbolically keep him near.